You mean that some of you run because you feel you were born to, and others do it….for weight loss?

Sure, I know plenty of runners that joke that running as the only way they can eat the things they love, whenever they want, but for those of you that are serious about using only running as a method of weight loss or maintenance, I want to introduce to you the concept of EPOC.

A little science, if you will play along: EPOC, also known as “excess post-exercise oxygen consumption,” helps us restore our depletion of oxygen after a very hard workout. What’s even better is that it continues to work our metabolism, so you’re killing calories well after your workout (another reason to get off the couch and go for a run or lift some weights!) In addition to be able to keep your metabolism going, EPOC is also good for getting lactic acid out of your muscles after a strenuous workout. 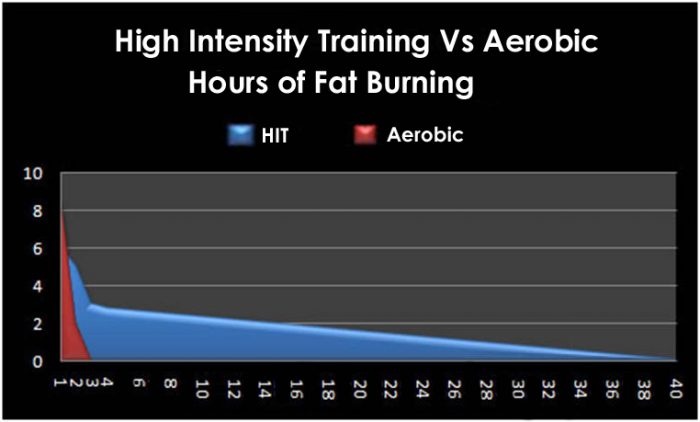 The effects of EPOC are observed after a workout because your body needs to restore the oxygen that was used during your workout. The effects of EPOC are greater after an intense workout compared to a moderate workout. Training with high intensity intervals (which we talked about last week in the interval training blog here) or intense resistance workouts can cause a greater effect of EPOC than aerobic workouts.

Translation: lifting weights will cause a greater number of calories burned after your workouts, than aerobic training would.

This is due to the disturbance to the body’s preference to be at homeostasis (wanting to be stable and have constant properties). High intensity intervals and resistance workouts cause a higher deficit in homeostasis levels in the body. This will require more energy to return the body back to a condition it wants to be in. When we use several large muscle groups at the same time, more oxygen is required to be distributed to those muscles to maintain the intensity of the exercise. The more oxygen used during your exercise, the greater effect EPOC will be post-workout.

For weight training, the bench press and the dead lift are two very good examples of exercises to be able to initiate EPOC effectively. They both require large muscle groups to work simultaneously to maintain the resistance and stabilize the body. An alternative that can work EPOC effectively is circuit training. Circuit training works all muscles constantly because you are always moving and with little rest breaks between circuits. Sets would run between 45-90 seconds and breaks would be 30-60seconds after a full circuit.

Brought to you by Amelia Ng and Nicole

Questions? Comments?  Want us to throw other big scientifity jargon-y words at you and explain the relevance?   Email us at info@lephysique.com ~ we’re here to help!